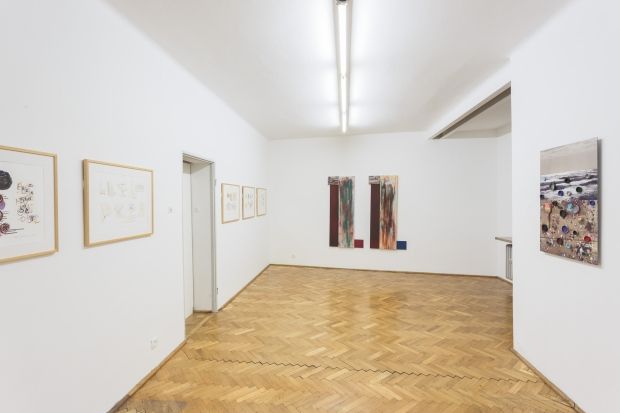 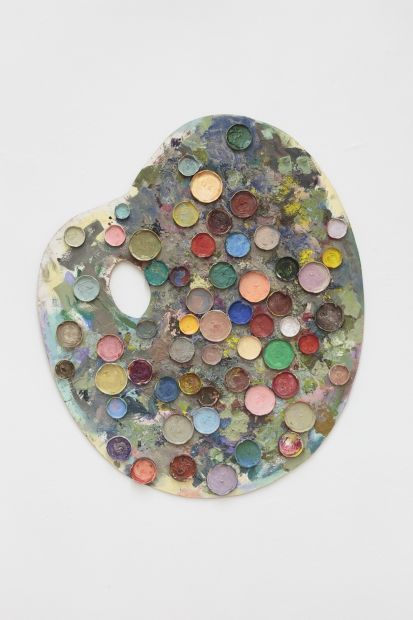 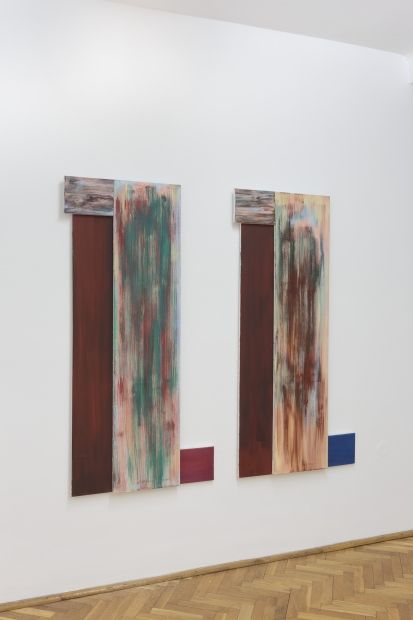 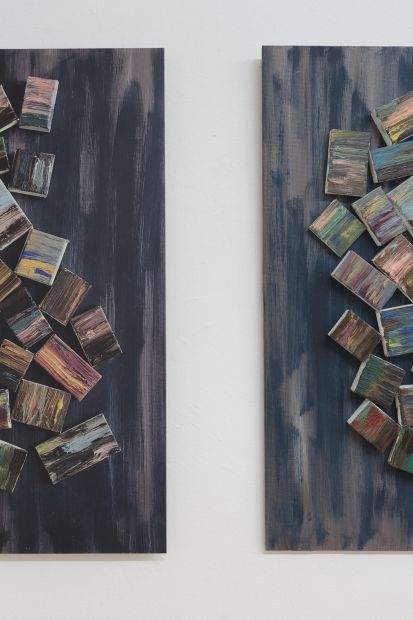 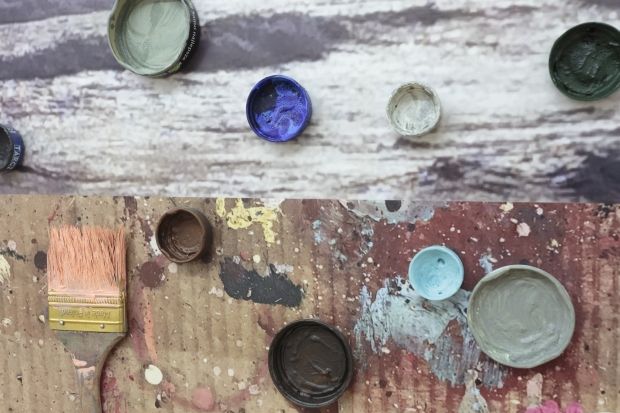 'Repulsive' consists on yellow, brown and blue. 'Faint' is green, brown and pink. 'Dispassionate' - blue, brown and green. These atypical colors are manifested through distinctive 'scribbles' made with crayons. On a drawing, beside those mentioned above, one can also see: 'torsional', 'hopeless', 'dolorous' and 'nasty'. What are the motives standing behind the artist's decision to juxtapose the adjectives reffering to extermely unpleasant emotions with arbitrarily chosen colors?

Making 'scribbled' mix of colors is one of Tomasz Ciecierski's signature gestures. Next to inclusion of brushes, tubes, painting palettes (and material experience of the studio in general) within canvases, it is a crucial element of 'inventarisation' of painter's workshop. An impression that occurs in a contact with a specific tint is dominated by the visuality, as we still belive. In case of this artist, its verbal transposition used to be seen as a conceptual gesture. It came with such early works as "Painting palette" (1972), where one can find sucha colors as 'sad', 'tender' or 'indistinct' beside more classic ones. However, the sensual aspect that occurs here brings something more to the picture than a mere reduction to the verbal language.

"Drafts" (2002) - a bibliophile publication is an artistic object which gives us the broadest insight into Ciecierski's specific method and summerizes it in the most synthetic way. A series of 'scrawls' collected in the book had been created after the artist's visit to New York City in 1971. The drawings were notations of the phenomena he has been experiencing in his studio during the creative process. Inspired by Claesa Oldenburg's notebook, reveals Ciecierski's fascination with pop art. On its very first pages one can see careless drawings of MoMA's signature artworks such as famous "Campbell Soup Cans" by Andy Warhol. In the context of upgoing show, pop art is essential if we see it as an art direction that was questioning art's autonomous ontology. Jean Baudrillard in "The Consumer Society" claims that it was due to this direction that a distinction between mere objects and the artistc ones â€“ constatnly relevant in postwar late modernism - was finally abolished. However, at the turn of 1960's and 1970's, an inclusion of materiality â€“ physicality and utility of objects - into the field of art, was leading requirement not of pop, but of Minimal Art.

Robert Moris in his Notes on Sculpture focuses on differences between sculpture and painting in Minimal art and claims that in the latter it is a color that is foreign to stable forms. In his opinion, Minimal painters made an effort to free color from the drawn shape to establish its autonomy. In this perspective color remains immaterial, nontactile which makes it inconsistent with the physical nature of sculpture. Thereby it doesn't refer to the experience of the space so crucial for Minimal art and its phenomenological inclinations.

What seems to be the most innovative quality in Ciecierski's practice is a transpostion of color outside mere visual field. His paintings affect us with almost synesthetic manner. Colors mediate senstations of being in space, especially of the studio space. The space is experienced as a series o phenomena, but at the same time it contains the flesh of the arist that is built of the same 'tissue' as the canvases (which reminds us of Maurice Merleau-Ponty's "la chair du monde"). New works presented on the show â€“ drawings as well as canvases â€“ give as a strong affect of 'organic' tremble. The unusual juxtapositions of colors let us resonate with the artist's affects/bodily sensations almost on the physiological level.